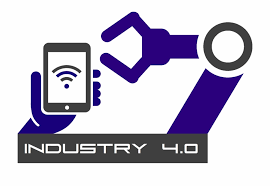 A sensor is a device that detects and responds to some type of input from the physical environment. The specific input could be light, heat, motion, moisture, pressure, or any one of a great number of other environmental phenomena. The output is generally a signal that is converted to human-readable display at the sensor location or transmitted electronically over a network for reading or further processing.

The Internet of Things is a system of interrelated computing devices, mechanical and digital machines, objects, animals or people that are provided with unique identifiers and the ability to transfer data over a network without requiring human-to-human or human-to-computer interaction.

A real-time location system (RTLS) is one of a number of technologies that detects the current geolocation of a target, which may be anything from a vehicle to an item in a manufacturing plant to a person. RTLS-capable products are used in an ever-increasing number of sectors including supply chain management (SCM), health care, the military, retail, recreation, and postal and courier services.

An automated guided vehicle or automatic guided vehicle is a portable robot that follows along marked long lines or wires on the floor, or uses radio waves, vision cameras, magnets, or lasers for navigation.

An HMI is a software application that presents information to an operator or user about the state of a process, and to accept and implement the operators control instructions. Typically information is displayed in a graphic format (Graphical User Interface or GUI). An HMI is often a part of a SCADA (Supervisory Control and Data Acquisition) system.

SCADA is an acronym for supervisory control and data acquisition, a computer system for gathering and analyzing real time data. SCADA systems are used to monitor and control a plant or equipment in industries such as telecommunications, water and waste control, energy, oil and gas refining and transportation.

A CMMS is computer software designed to simplify maintenance management. CMMS stands for Computerized Maintenance Management System (or Software) and is sometimes referred to as Enterprise Asset Management (EAM) software.

The 3D printing process builds a three-dimensional object from a computer-aided design (CAD) model, usually by successively adding material layer by layer, which is why it is also called additive manufacturing, unlike conventional machining, casting and forging processes, where material is removed from a stock item (subtractive manufacturing) or poured into a mold and shaped by means of dies, presses and hammers.

The term "3D printing" covers a variety of processes in which material is joined or solidified under computer control to create a three-dimensional object, with material being added together (such as liquid molecules or powder grains being fused together), typically layer by layer. In the 1990s, 3D-printing techniques were considered suitable only for the production of functional or aesthetic prototypes and a more appropriate term for it was rapid prototyping. As of 2019 the precision, repeatability and material range have increased to the point that some 3D-printing processes are considered viable as an industrial-production technology, whereby the term additive manufacturing can be used synonymously with "3D printing". One of the key advantages of 3D printing is the ability to produce very complex shapes or geometries, and a prerequisite for producing any 3D printed part is a digital 3D model or a CAD file.

Augmented reality (AR) is an interactive experience of a real-world environment where the objects that reside in the real world are enhanced by computer-generated perceptual information, sometimes across multiple sensory modalities, including visual, auditory, haptic (the ability "to grasp something), somatosensory (a part of the sensory nervous system) and olfactory (is a chemoreception that forms the sense of smell). AR can be defined as a system that fulfills three basic features: a combination of real and virtual worlds, real-time interaction, and accurate 3D registration of virtual and real objects. The overlaid sensory information can be constructive (i.e. additive to the natural environment), or destructive (i.e. masking of the natural environment). This experience is seamlessly interwoven with the physical world such that it is perceived as an immersive aspect of the real environment. In this way, augmented reality alters one's ongoing perception of a real-world environment, whereas virtual reality completely replaces the user's real-world environment with a simulated one. Augmented reality is related to two largely synonymous terms: mixed reality and computer-mediated reality.

Energy efficient technologies can be found in all parts of the energy conversion chain: from exploration and production of primary energy resources, to power generation and oil refineries to electricity grids, to the final use in industry, buildings and transportation.

A collaborative robot is a robot that collaborates with humans in some way – either as an assistant in a task or process, or as a guide. Unlike autonomous robots, which work largely alone and without supervision, collaborative robots are programmed and designed to work with human instruction, or otherwise respond to human behaviors and actions.

Cloud computing is the on-demand availability of computer system resources, especially data storage and computing power, without direct active management by the user. The term is generally used to describe data centers available to many users over the Internet.

Edge computing is a direct response to the monumental increase of bandwidth required by the end devices that underpin the IoT.

Edge and fog computing are closely related – both refer to the ability to process data closer to the requester / consumer to reduce latency cost and increase user experience. Both are able to filter data before it “hit” a big data lake for further consumption, reducing the amount of data that needs to be processed. The basic idea of edge and fog computing is to move data logic (mainly around data validation / data grammar checks) to an outer ring of capabilities.

Edge and fog computing concepts have been developed to respond to the cheer increase of data bandwidth required by end devices and has been fuelled by the explosion of IoT (Internet of Things) which in turn has increased the need to process the generated data much closer to the source in real time. In other words, edge and fog computing push the cloud (read data centre) closer to the requester to minimise latency, minimise cost and increase quality.

Cybersecurity is how individuals and organisations reduce the risk of cyber attack. Cybersecurity's core function is to protect the devices we all use (smartphones, laptops, tablets and computers), and the services we access - both online and at work - from theft or damage.

A collaboration platform is a category of business software that adds broad social networking capabilities to work processes.  The goal of a collaboration software application is to foster innovation by incorporating knowledge management into business processes so employees can share information and solve business problems more efficiently.

Product lifecycle management (PLM) is the process of managing complex product information, engineering and manufacturing workflows, and collaboration. PLM software connects people, processes, and data across the entire product lifecycle to a central repository of information.

Digital twins are virtual replicas of physical devices that data scientists and IT pros can use to run simulations before actual devices are built and deployed. They are also changing how technologies such as IoT, AI and analytics are optimized.

A digital twin is a digital representation of a physical object or system. The technology behind digital twins has expanded to include large items such as buildings, factories and even cities, and some have said people and processes can have digital twins, expanding the concept even further. The idea first arose at NASA: full-scale mockups of early space capsules, used on the ground to mirror and diagnose problems in orbit, eventually gave way to fully digital simulations.