Introduction to CI/CD with GitLab

In this document, we’ll present an overview of the concepts of Continuous Integration, Continuous Delivery, and Continuous Deployment, as well as an introduction to GitLab CI/CD.

The continuous methodologies of software development are based on automating the execution of scripts to minimize the chance of introducing errors while developing applications. They require less human intervention or even no intervention at all, from the development of new code until its deployment.

It involves continuously building, testing, and deploying code changes at every small iteration, reducing the chance of developing new code based on bugged or failed previous versions.

There are three main approaches to this methodology, each of them to be applied according to what best suits your strategy.

Consider an application that has its code stored in a Git repository in GitLab. Developers push code changes every day, multiple times a day. For every push to the repository, you can create a set of scripts to build and test your application automatically, decreasing the chance of introducing errors to your app.

This practice is known as Continuous Integration; for every change submitted to an application - even to development branches - it’s built and tested automatically and continuously, ensuring the introduced changes pass all tests, guidelines, and code compliance standards you established for your app.

GitLab itself is an example of using Continuous Integration as a software development method. For every push to the project, there’s a set of scripts the code is checked against.

Continuous Delivery is a step beyond Continuous Integration. Your application is not only built and tested at every code change pushed to the codebase, but, as an additional step, it’s also deployed continuously, though the deployments are triggered manually.

This method ensures the code is checked automatically but requires human intervention to manually and strategically trigger the deployment of the changes.

GitLab CI/CD is a powerful tool built into GitLab that allows you to apply all the continuous methods (Continuous Integration, Delivery, and Deployment) to your software with no third-party application or integration needed.

To use GitLab CI/CD, all you need is an application codebase hosted in a Git repository, and for your build, test, and deployment scripts to be specified in a file called .gitlab-ci.yml, located in the root path of your repository.

To add scripts to that file, you’ll need to organize them in a sequence that suits your application and are in accordance with the tests you wish to perform. To visualize the process, imagine that all the scripts you add to the configuration file are the same as the commands you run on a terminal on your computer.

Once you’ve added your .gitlab-ci.yml configuration file to your repository, GitLab will detect it and run your scripts with the tool called GitLab Runner, which works similarly to your terminal.

The scripts are grouped into jobs, and together they compose a pipeline. A minimalist example of .gitlab-ci.yml file could contain:

The before_script attribute would install the dependencies for your app before running anything, and a job called run-test would print the Ruby version of the current system. Both of them compose a pipeline triggered at every push to any branch of the repository.

Consider the following example for how GitLab CI/CD fits in a common development workflow.

Assume that you have discussed a code implementation in an issue and worked locally on your proposed changes. Once you push your commits to a feature branch in a remote repository in GitLab, the CI/CD pipeline set for your project is triggered. By doing so, GitLab CI/CD:

Once you’re happy with your implementation: 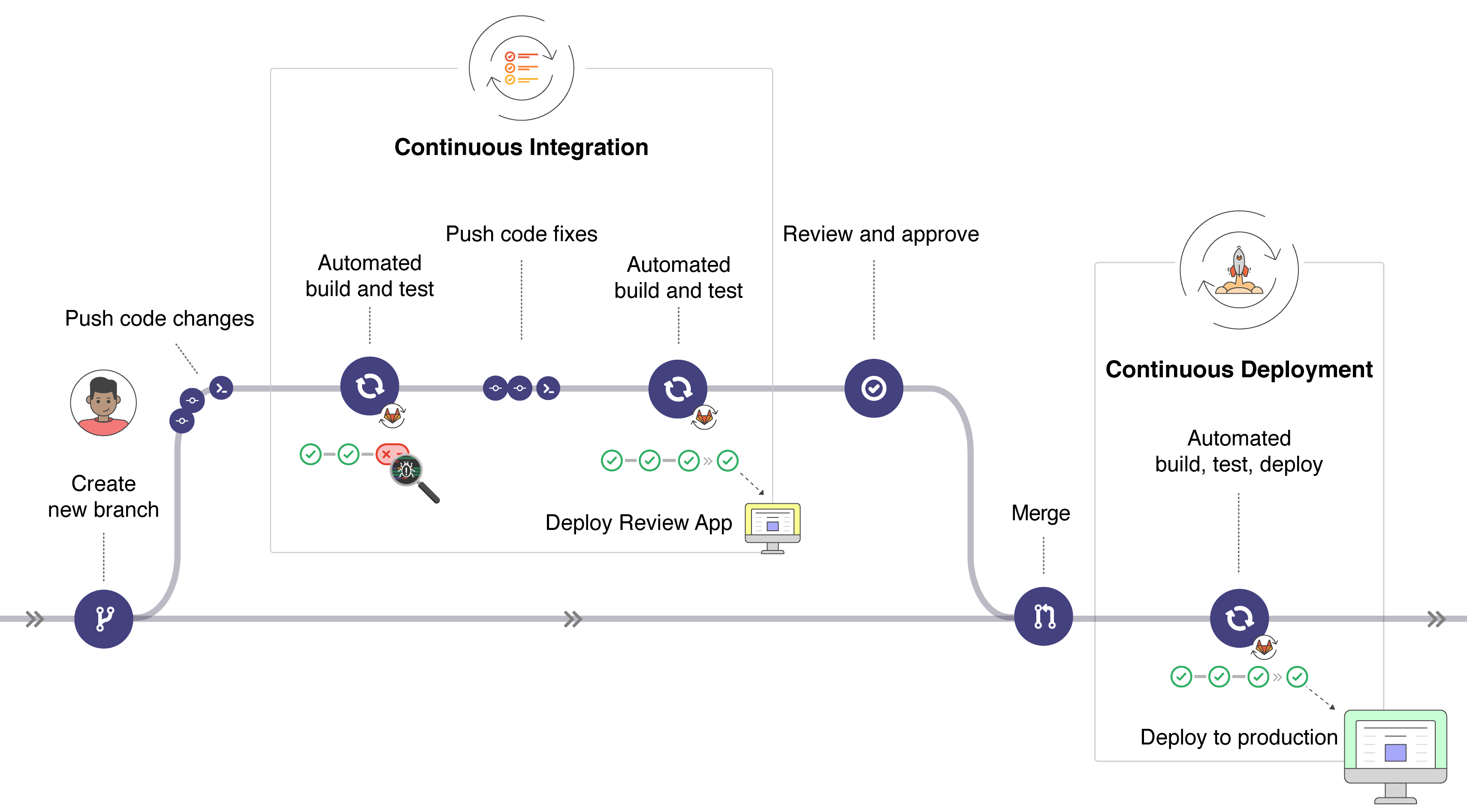 GitLab CI/CD is capable of doing a lot more, but this workflow exemplifies GitLab’s ability to track the entire process, without the need for an external tool to deliver your software. And, most usefully, you can visualize all the steps through the GitLab UI.

A deeper look into the CI/CD basic workflow

If we take a deeper look into the basic workflow, we can see the features available in GitLab at each stage of the DevOps lifecycle, as shown in the illustration below. 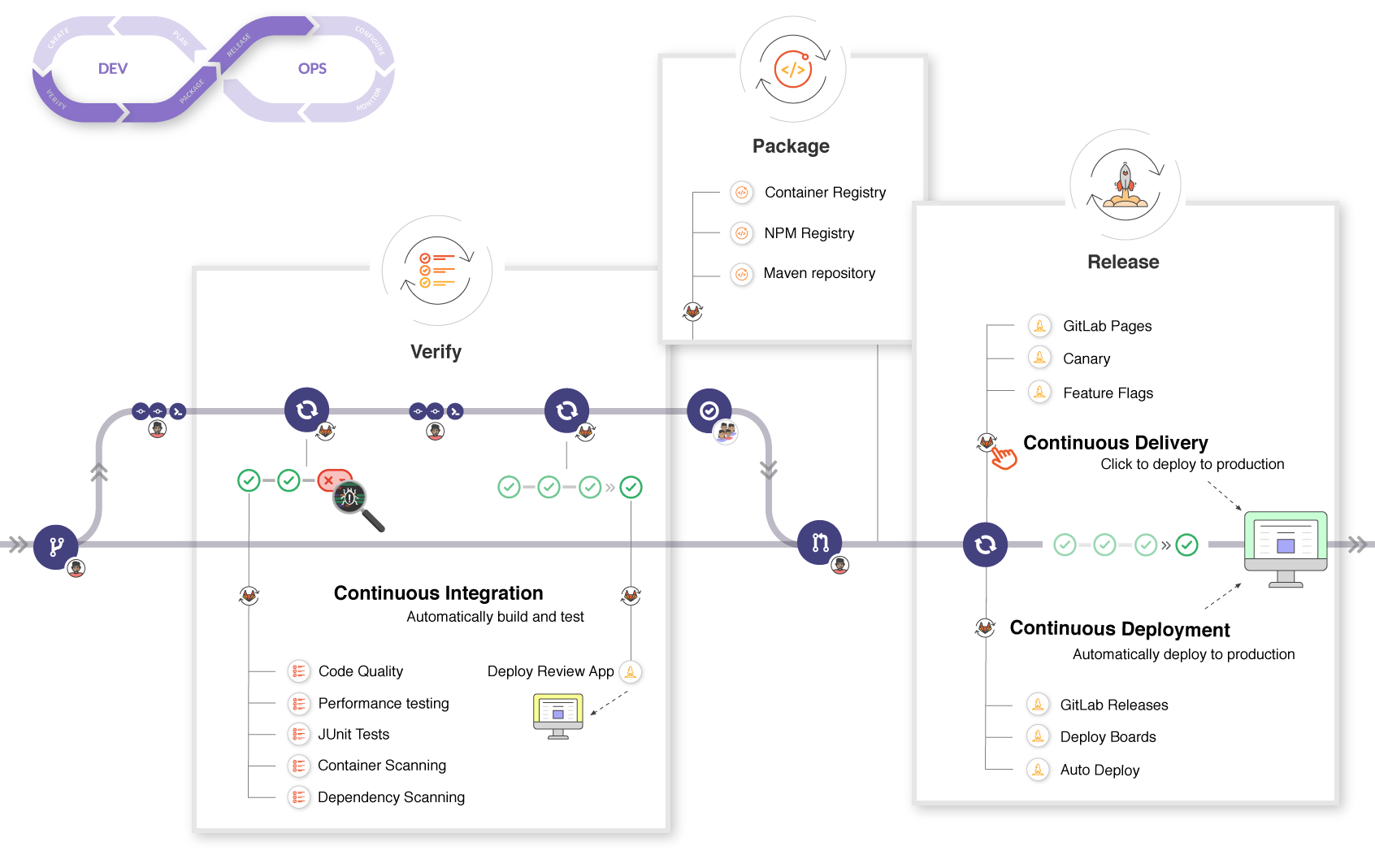 If you look at the image from the left to the right, you’ll see some of the features available in GitLab according to each stage (Verify, Package, Release).

With GitLab CI/CD you can also: